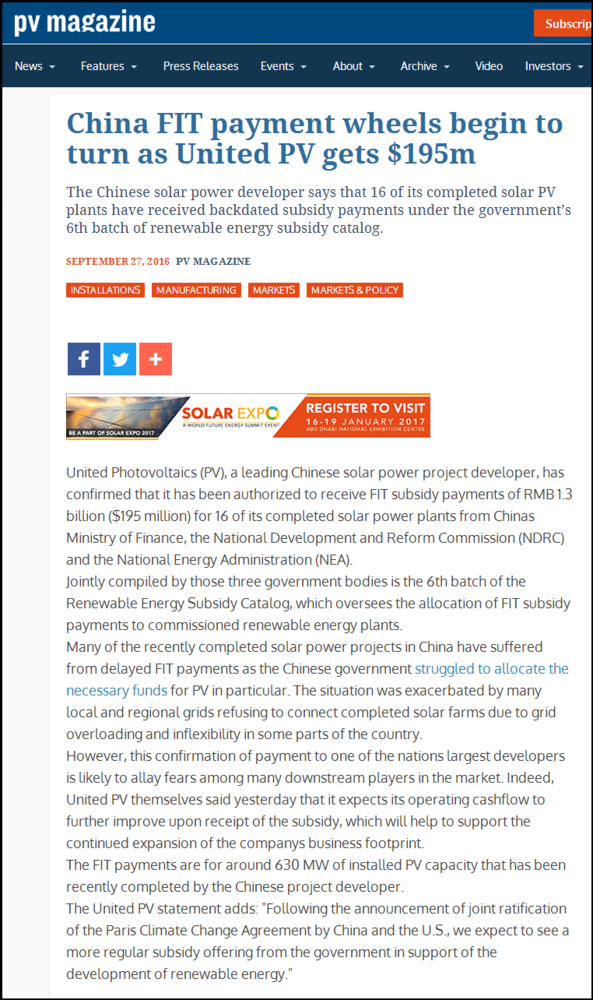 United Photovoltaics (PV), a leading Chinese solar power project developer, has confirmed that it has been authorized to receive FIT subsidy payments of RMB 1.3 billion ($195 million) for 16 of its completed solar power plants from Chinas Ministry of Finance, the National Development and Reform Commission (NDRC) and the National Energy Administration (NEA).

Jointly compiled by those three government bodies is the 6th batch of the Renewable Energy Subsidy Catalog, which oversees the allocation of FIT subsidy payments to commissioned renewable energy plants.

Many of the recently completed solar power projects in China have suffered from delayed FIT payments as the Chinese government struggled to allocate the necessary funds for PV in particular. The situation was exacerbated by many local and regional grids refusing to connect completed solar farms due to grid overloading and inflexibility in some parts of the country.

However, this confirmation of payment to one of the nations largest developers is likely to allay fears among many downstream players in the market. Indeed, United PV themselves said yesterday that it expects its operating cashflow to further improve upon receipt of the subsidy, which will help to support the continued expansion of the companys business footprint.

The FIT payments are for around 630 MW of installed PV capacity that has been recently completed by the Chinese project developer.

The United PV statement adds: "Following the announcement of joint ratification of the Paris Climate Change Agreement by China and the U.S., we expect to see a more regular subsidy offering from the government in support of the development of renewable energy."