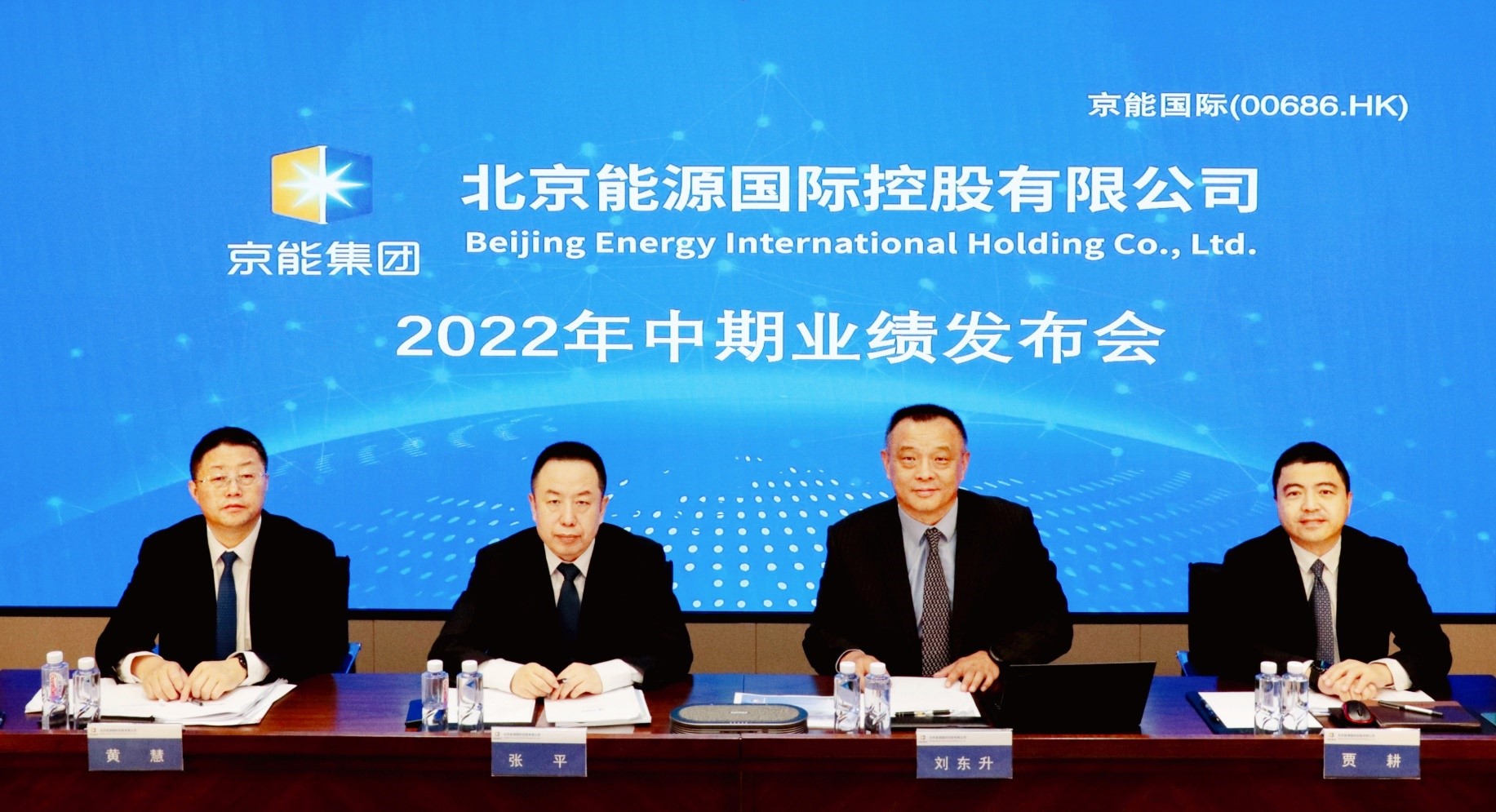 During the meeting, the senior management team introduced the interim performance, operation and production situation, future development and measures for the year 2022. In 2022, the company has closely focused on its annual development goals, taking “deepening reform, innovating development, improving quality and increasing efficiency” as the main guide, adhering to the concept of efficient and open international marketization, continuing to release the vitality of market mechanism, seizing development opportunities, increasing the reserve of wind and solar resources, continuously improving profitability, and developing on a fast track with high quality.

In 2022, the company actively leverages its own advantages, taking reform and innovation as the driver, overall management promotion as the starting point, enriching the industrial structure, speeding up the pace of integrated energy development, strengthening equity finance, actively introducing strategic investment partners, and striving for innovation, advances and breakthroughs.

Two-wheel drive at home and abroad, building the foundation for high-quality and healthy development

Under the guidance of national policies, the company has been firmly committed to its goal, diligently forged ahead, and contributed to the ambitious blueprint of China’s dual carbon goal with concrete actions.

Efficient utilization of clean energy is inseparable from the large-scale development and energy base, which is the inevitable trend of industrial development. In the first half of this year, the company has focused on the construction of a new power system with new energy as the main body, promoted both domestic and overseas business, accelerated its large-scale development, continuously promoted the total installed capacity, and consolidated the foundation of high-quality and healthy development throughout the year.

At home, it has increased the development of new energy projects in Beijing through increasing the consumption ratio of green energy in the capital city. It successfully completed the filing of Mujiayu Dayan 100MW project in Miyun District, the largest ground centralized photovoltaic project in Beijing, which will commence its construction at the end of the year; Fengtai Railway Station’s 6.5MW distributed photovoltaic project will be put into operation in September; the 10MW distributed photovoltaic project of Huairou Institute of High Energy of Chinese Academy of Sciences is ready for construction; Investment agreements have been signed for the industrial integration project of Photovoltaic and Smart Agriculture in Daxingzhuang Town, Pinggu District as well as in Miyun Town of Miyun District, both of which are underway and will become typical demonstration projects of modern and efficient agriculture in Beijing. In addition to the above-mentioned projects, the company has newly reserved clean energy projects in Beijing, the installed capacity of these projects including Tianhu Convention Center in Fangshan District, Baoshan Town in Huairou District, IAT Industrial Park in Yizhuang, Daxing District, Mafang Logistics Base in Pinggu District, Maquanying Metro Station of Line 15, among others, has exceeded 100MW.

The company gives full play to the advantages of the capital city, relying on the “green electricity to Beijing” project to speed up the layout of the large clean energy base projects around Beijing. The 10GW supporting base project of “Green Electricity to Beijing” in the south of Xilingol League, which is a key cooperative project between Beijing and Inner Mongolia, and the integration project of 600,000 tons of hydrogen storage through wind and light to produce green ammonia successfully passed the expert review; the project of “Transmitting Jilin’s Electricity to Beijing” has completed the signing of strategic cooperation framework agreement between Beijing and Jilin governments, and the supporting 10GW wind and solar base project will be kicked off in the near future; Tongliao GW-level ecological wind power base project in Inner Mongolia will be approved and started in the near future; the GW-level wind and solar base projects in Hohhot, Alashan and Erdos of Inner Mongolia, Tieling of Liaoning, Suihua of Heilongjiang and Mulei of Xinjiang are also under active application process. The resource reserve of the above-mentioned base projects has exceeded 40GW.

In addition, the company takes advantage of its synergy and relies on the existing layout of operating power stations to promote the construction of GW-level project clusters, focusing on Hebei, Shandong, Shanxi, Liaoning, Guangxi, Yunnan and other places to promote the application for 7GW project construction. It steadily promotes the cooperation of about 2GW projects in Guangdong, Guangxi, Jiangxi and other places, actively follows up on offshore wind power projects and strives to achieve new breakthrough in this field.

On overseas business, the company studies relevant policies and promotes overseas business progress in an orderly manner. As of the first half of this year, while steadily promoting nearly 1GW projects in Australia, it has completed all the installation of 46.2MW wind power project in Gia Lai Province of Vietnam and completed the development procedures of 100MW wind power project in Bến Tre, Vietnam. With this achievement, the company has locked in a number of high-quality renewable energy projects ready for construction overseas.

Achieving the dual carbon goals represents a broad and profound transformation, and it is also a long-term and arduous undertaking. This year marks a strategic opportunity period to implement the dual carbon goals, as well as a crucial year for the company to implement its 14th Five-Year Plan. In this regard, it has anchored itself to high-quality development, as it is seizing the development opportunities of the times and consolidating and expanding the advantages of scale, it has deepened the reform to “keep fit” by strengthening refined management, improving utilization efficiency, optimizing asset quality, reducing costs and increasing income.

In the first half of this year, its cost control capability has improved significantly. Through the continuous cost reduction campaign, its cost income ratio(CIR) decreased by 2.98 percentage points year-on-year, and the operation and maintenance cost of stock projects decreased by 8.52 percentage points year-on-year. Concurrently, it has continuously optimized its debt structure and reduced the financial cost, which has laid a solid ground work for reducing its financial cost and achieving its annual profit target.

From the perspective of profit model, the main income of clean energy operators comes from the generation and sale of electricity. Hence, improving electricity marketing is the anchor of clean energy enterprises. In the first half of the year, the company carried out in-depth research and careful planning to further improve electricity marketing. In terms of power generation, the medium-and-long-term power of the power stations participating in the market transaction was set to be 3.071 billion kWh, accounting for 77.04% of the annual planned power of the power stations participating in the transaction.

The transaction price of stock projects of the same caliber increased by 80.18 yuan /MWh. The cooperative marketing electricity reached 131 million kWh and 6200kWh of additional electricity has been sold, thus locking in 152 million kWh of green power transaction of electricity.

In the first half of this year, it has continuously innovated equity finance channels to ensure the long-term development momentum of its listed company. With regard to its listed company, it has actively promoted the pilot issuance of China’s first public offering REITs for photovoltaic power generation, planned equity finance work such as ABS, ABCP and ABN. At project level, it has formed strategic cooperation with Sembcorp of Singapore, Saudi’s ACWA Power, the US’s AP Company and other large multinational enterprises, and accelerated the establishment of joint venture project companies and jointly expanded projects to create a win-win situation.

The company focuses on Beijing-Tianjin-Hebei, Yangtze River Delta, Guangdong-Hong Kong-Macao Greater Bay Area and Chengdu-Chongqing Economic Belt, and continuously increases the development of integrated energy projects. Guangdong’s Yangxi 2×120MW natural gas combined cooling, heating and power supply project has been approved, and it is expected to be commenced at the end of the year. Hebei’s Cangzhou Yanjing Beer and Shenzhen’s Qianhai Free Trade Zone Phase II distributed photovoltaic project have commenced in succession. The phase-I BIPV project in Jiaxing is connected to the grid at full capacity, and the phase-II BIPV project in Jiaxing continues to advance.

It is worth noting that the company has a great potential for the project construction of Mujiayu in Miyun District, Beijing. Focusing on the strategy of rural revitalization, it is exploring a new industrial modality of integrating science and technology, agriculture, eco-tourism and smart energy in Beijing.

In the second half of the year, the company will further expand the scale of domestic main business, continue to capitalize on the advantages of an enterprise in the capital city and accelerate the development of energy base projects. It will build industrial strategic synergy and strive for industrial resources, innovate overseas investment mode and steadily promote market expansion. It will accelerate the introduction of equity capital and improve its existing debt structure, accelerate technology leadership, digital transformation, and accumulate technology and data asset empowerment. It will pay attention to spot trading of electricity and seize the favorable opportunity of energy transformation, actively cultivate the user market, speed up the layout of energy storage business, and identify the focus of integrated energy development, incubate technological innovation and enhance the company’s future market value.

Guided by the blueprint of the 14th Five-Year Plan, the company will continue to take value creation as the driver, high-quality development as the core, and focus on the strategic goal of building a first-class international clean energy provider and green investor and operator, and accelerate the construction of a green-oriented, multi-functional and intelligent ecological system of clean energy industry, so as to contribute to the high-quality development of green and low-carbon energy development in the country.

After that, the senior management team of the company answered the questions that market has been mostly focused on. The views through the video link and the platform numbered nearly at 80,000, which was remarkably high. With that, the 2022 Interim Results Briefing was successfully concluded.