On July 8, 2022, Zhang Ping, chairman of the Board of Directors of Beijing Energy International, Lv Yunhe, vice president and chief representative of Saudi’s ACWA Power(China), Li Ping, independent director of the Board of Directors of ACWA Power , Li Bing, general manager of Sembcorp (China), and Yue Lei, director of Large Project Development of Air Products and Chemicals (China) Investment Co., Ltd.(AP), together with their delegations went to Xilinhot to visit Luo Qing, deputy secretary and head of Xilingol League in Inner Mongolia, and exchanged on promoting the large-scale green energy base project in the southern part of Xilingol League. Hu Chengdong, member of the Party group and deputy head of the Administrative Office; Li Xinyi, head of China Investment and Investor Relations of ACWA Power; Jia Geng and Wu Chaoke, vice presidents of Beijing Energy International, Wang Ruotao, deputy director of the Company Office, and Liu Lei, general manager of the North Branch of Beijing Energy International, attended the meeting. 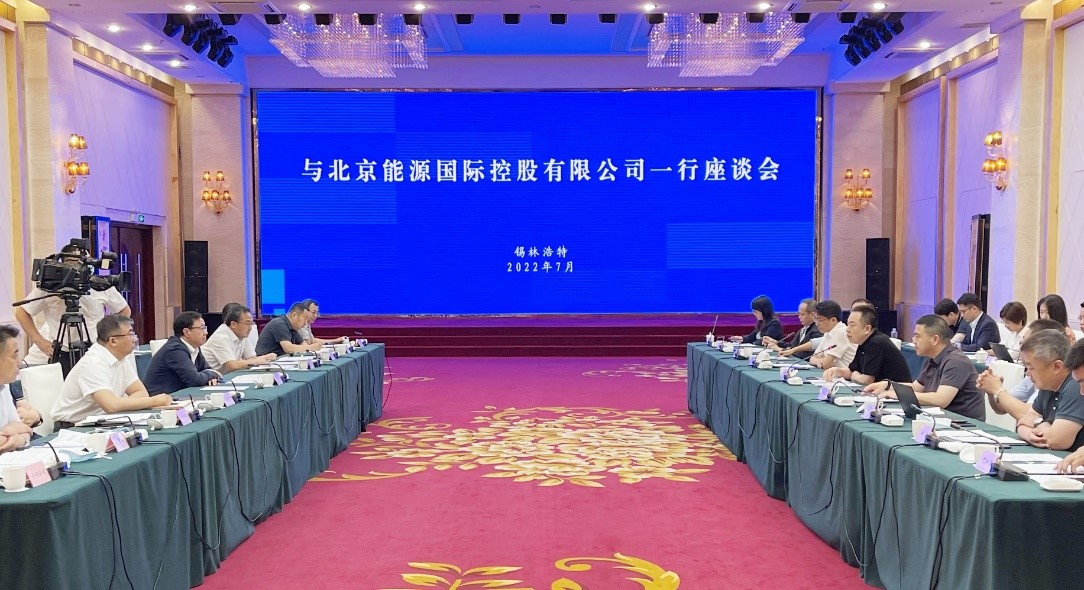 During the meeting, the participants had in-depth discussions on accelerating the demonstration project of hydrogen storage to produce green ammonia in Xilingol, the base project of “Green Electricity to Beijing” and the optimal design, project approval and project entry of Duolun Pumped Storage Project.
Zhang Ping thanked the Administrative Office for its long-term support to Beijing Energy Holding and Beijing Energy International and introduced the phased progress of the large-scale green energy base project. He said that Beijing Energy International, as a critical carrier of Beijing Energy Holding’s investment in clean energy industry ecosystem, very much focuses on the cooperation mechanism with the Administrative Office in new energy and has always been committed to deepening the cooperation between Beijing and Inner Mongolia and continuously cemented the positive momentum of clean energy project. Beijing Energy International, together with ACWA Power, Sembcorp (China), and AP and other strategic partners, looks forward to participating in local economic construction and contributing to the all-round coordinated development of local new energy industry. It is hoped that the Administrative Office will give its support as always, and Beijing Energy International will strive to seize the opportunity of carbon peaking and carbon neutrality, fully promote the large-scale green energy base project, galvanize the efforts of all its partners, further optimize and upgrade regional economic industrial chain, and deliver both social and economic benefits.
Lv Yunhe introduced the basic situation and industrial layout of Saudi’s ACWA Power. He said that the company has the capability and confidence to promote the demonstration project of hydrogen storage and green ammonia production by utilizing wind and solar resources and will fully leverage its advantages in renewable energy and green hydrogen in project implementation and provide reliable and strong support.
Li Bing introduced the basic situation and development plan of Sembcorp (China). He said that the company stands ready to forge strong alliance with Beijing Energy International, ACWA Power and AP, and will exert the advantages of all parties, and full expediate the large-scale green energy base project.
Yue Lei introduced the development history and market layout of AP. She said that facing the historical opportunity period of accelerated development of global hydrogen industry, AP, as one of the three largest hydrogen suppliers in the world, will deepen the cooperation mechanism of hydrogen energy industry with strategic partners such as Beijing Energy International, ACWA Power and Sembcorp (China), and continuously expand production capacity, broaden the market and seize opportunities worldwide.
Luo Qing welcomed Zhang Ping and all the visiting delegations, thanked Beijing Energy International and its partners for their long-term support to the League, and affirmed the phased achievements of the large-scale green energy base project. He pointed out that under the background of national strategy of dual carbon goals, the development and construction of the large-scale green energy base project has no time to delay. Beijing Energy International and its partners should seize the opportunity of energy policy, kick off the demonstration project of hydrogen storage for green ammonia from wind and light as soon as possible, actively coordinate and promote the signing of cooperation framework agreement between Beijing and Inner Mongolia governments on the “Green Electricity to Beijing” base project, continue to optimize the site selection and construction scheme of pumped storage project, and promote the early incorporation of the projects into relevant national plans. He said that the Administrative Office will provide a full range of policy support and service in the whole process of project implementation, create better business conditions and investment environment, continuously deepen the cooperation with enterprises, and jointly facilitate common development.